Science fiction has always been the place to look for futuristic, interplanetary inspiration. What lies in those galaxies beyond the moon, and how can we apply it to our lives here on Earth? Star Wars, perhaps the most famous “space opera” of all time, puts humans alongside robots and aliens, in a world filled with exciting gizmos and gadgets as well as dramatic adventure.

With the latest installment in the franchise, The Force Awakens, about to hit theaters, let’s take a look at just a few of the technological advancements that the creators of Star Wars saw in the stars before they came down to our home planet.

The iconic end scene of Empire Strikes Back will forever live in film history, but many forget the follow-up scene where Luke replaces his recently removed right hand with a robotic version. The scene even shows it being tested for sensitivity to pain.

Today Touch Bionics has developed their own robotic arm with astonishing sensitivity and gripping increments for a strong, precise grasp that even allows for complicated tasks like shoelace tying – or possibly lightsaber dueling?

“Help me, Obi Wan Kenobi. You’re our only hope.” While this line is among the most famous from the film canon, it’s also hard to forget that it was uttered by a holographic recording.

Holograms play a major role in Star Wars, from this line that drew Luke into the adventure to the terrifying and looming image of the Emperor that Vader kneels to.

Today we have several solutions, like the “Voxiebox” technology, that are creating 3D holograms using coordinated cameras and laser displays to project them into mid-air. They are still largely monochromatic, but so were the ones in Star Wars.

Many of us wanted an R2-D2 of our own growing up, and today we live in closer proximity to robotic helpers than ever before. Digital voice assistants like Siri and Alexa, similar to the droids Star Wars showed us, are already capable of handling people’s email and managing calendars as well as connecting to various automated home appliances such as thermostats, security systems and lights.

These “assistants” can essentially do many of the same tasks a human personal assistant would. Now there is FRIEND too, is a semi-autonomous robot designed to help people who have had strokes or are otherwise incapacitated.

And as a fun nod to the upcoming film, the app Waze replaced its voice navigation with audio of Anthony Daniels (C3PO), which makes sense since our cell phones – possessing the ability to translate languages and inform us of cultural traditions – are basically protocol droids.

When the Star Wars arcade game was released, one of the most popular segments was the speeder bike race through the forests of Endor’s moon. That exciting scene from the film was so memorably thrilling that Aerofex has been working on making their own.

The Aero-X will be able to use carbon fiber rotors to lift up to two people vertically about 10 feet off the ground and transport them at speeds approaching 72 mph. It is set to be released in 2017 and the company is already taking refundable deposits of $5,000 on their website while they work out stability issues. 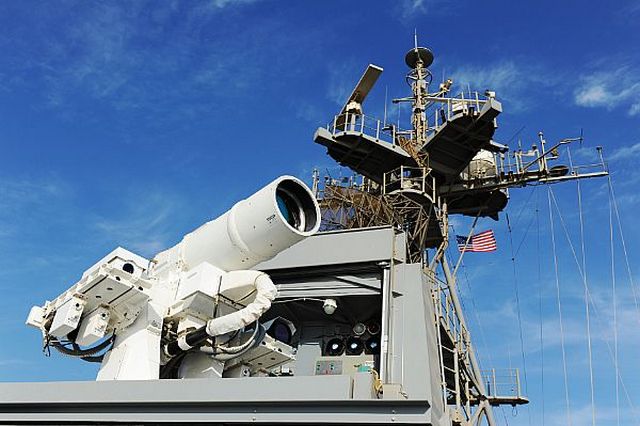 When it comes to large armaments for space ships and vehicles, Star Wars had no shortage of light cannons. From the ones that lit up space while Luke and Han fought off TIE fighters to the powerful weapon that provided cover for the Rebels to escape Hoth, these laser blasters are no joke.

And we already have one deployed on a US Navy ship, the USS Ponce. While not as impressive looking, it does use a laser trained on a target to burn through aerial attackers like drones.

The king of all Star Wars technology, hardly a child or adult has seen these films and not wanted one of these “elegant weapons.” The signature sidearm of the Jedi knights, lightsabers are plasma-based swords that can cut through almost anything and often are used to indicate a person’s metaphorical allegiance to Jedi or Sith.

In reality we haven’t quite made these, but more than a few battle-ready light-up versions are available, there is at least one using a high-powered laser that is insanely dangerous, and at MIT and Harvard professors are working on a method of building molecules out of photons.

Much of what we have come to love about Star Wars, the technology that helped to immerse us in this “galaxy far, far away,” has entered into our everyday lives back on Earth. Maybe it won’t be long before the first Jedi Academy is founded to help us learn the tricks of using all of these great tools.

What Parents Need To Know About Technology For Kids – Infographic