The year 2015 seems to be the year where most weapons designers are running out of ideas and begins to look into the action anime genre to find new ideas. With today`s globalist system, the rapid evolution of technology and sadly many ongoing large scale wars seems to have reached the period which Masamune Shirow fantasized about when he wrote “Ghost in the shell”. 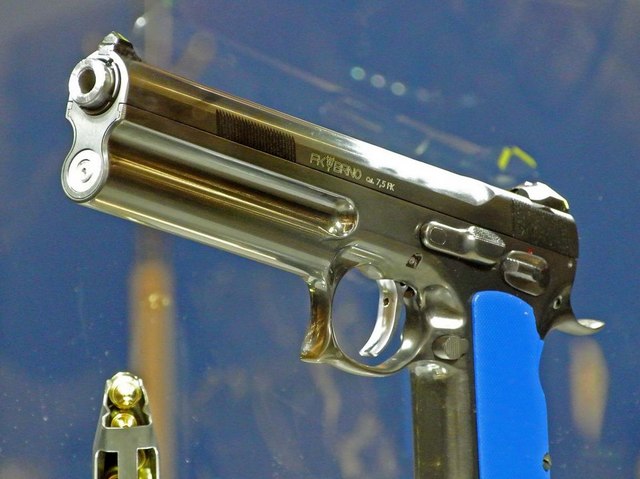 This Czech-based newcomer to the market, FK Brno, checked in (pun intended) to claim itself the throne of the most powerful semi automatic pistol designed in the 21st century. With a design based on an earlier Czech handgun CZ75, used in more than 50 military and police organizations worldwide, FK Brno comes with impressive features like a comfortable grip, a low bore axis similar to an Olympic sport pistol, muzzle velocity levels of 609,6 meters-per-second (2000 fps), extreme accuracy at ranges up to 100m, and a large counter weight underneath the barrel to facilitate comfortable single handed use under recoil.

The secret to power, which said to come close to a .44 Magnum round, lies inside the shell.Well, inside the ammunition to be exact. The propritatry 7.5mm FK bottlenecked round has more power than a standard 9x19mm round used all over the planet in the military and police, even in the CZ75.

Today, most armies and police forces make use of the old but gold 9x19mm pistol round. If we compare this world-wide standard round to the 7.5FK we can see one thing. That a normal 9x19mm pistol will usually fail when fired at 100 meters range, but the 7.5mmFK has more power at 100 meters than the 9x19mm at 10 meters. Now, imagine what devastating power 7.5FK has to offer at 10 meters range.

The rumor is that the manufacturer of FK Brno has already found buyers who has pre-ordered this beast for real-world use. It is expected to go into full production within the year. Talking about the use of this particular weapon, it is either the beginning of a new era in the weapons industry or somebody is preparing for World War III. Let`s hope this behemoth of a pistol will not be used against innocent human beings. Check out the video for a closer look.