Google Chrome users were frustrated to find that they can no longer access their favorite torrent sites. Starting today Google Chrome is blocking access to some of the most popular torrent sites for hosting “harmful programs”.

Some of the biggest torrent sites in the pirate world, including KickassTorrents, Torrentz.eu, RARBG and many others were affected by Google’s Safe Browsing filter. Now, whenever a user tries to visit the site using Google Chrome, they are welcomed by a warning message which says “Attackers on kat.cr might attempt to trick you into installing programs that harm your browsing experience”. 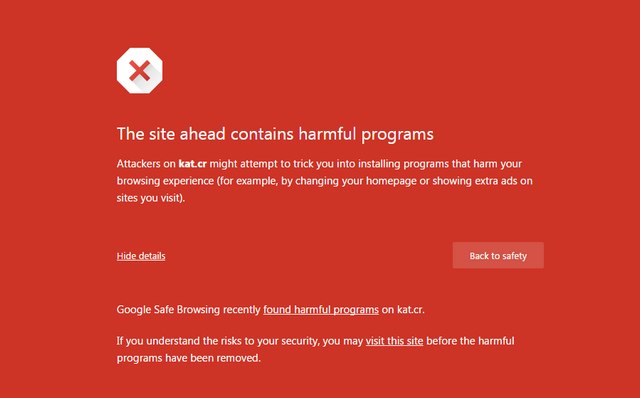 Even though the message states that “Google Safe Browsing recently found harmful programs” on each of those torrent sites, the site owners are baffled by this new warning message. Several of them have spoken to Torrent Freak to explain that their sites doesn’t even host any malicious software.

“There is no malicious software and you are still able to load ExtraTorrent in Mozilla Firefox, Opera, Chromium and other browsers,” the ExtraTorrent told Torrent Freak, “We’ll contact Google to resolve the issue shortly.”

Several other sites such as ThePirateBay and ISOHunt are now accessible to users. Surely, something must be very wrong here because all torrent sites appear normal on all the other browsers.

If you’re still unable to access your site, you can bypass the Chrome warning message by going to Chrome’s Settings > Show Advanced Settings and under Privacy > Uncheck “Enable phishing and malware protection.”

This is not recommended since it protects you from sites that actually host malware, so remember to turn it back on once this issue gets fixed.

Update: One by one torrent sites are coming back to normal. Chrome seems to have removed the block from all torrent sites. Extratorrent claims to have fixed the issue through Google Webmaster tools. Although, the cause behind all of this pain is still a mystery.