Google has rolled out a new update on Google+, enabling it’s users to create communities and connect with people who are passionate about similar interests. 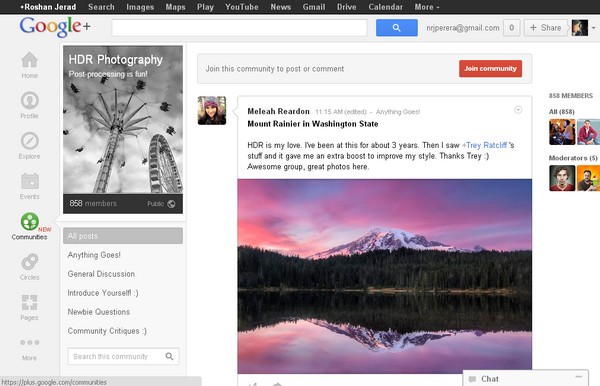 If you’re familiar with Facebook groups, this wont be such a new thing to you. But, it has few improvements that makes Google+ Communities much more exciting than Facebook groups. First of all, you can start hangouts with the community members and chat about stuff. And it even lets you to share webpages, videos and photos directly to the community from anywhere across the web, using the +1 button.

If you need to get a basic idea about this new community thingy, check out these new popular communities made for Star Wars, HDR Photography and my new community for Upcoming Movies.

Google+ now has 235 million active users across the platform, according to Google. Despite the fast-growing stats and improvements, Google+ is still struggling to survive as a social network. Well, every startup takes some time to make an impact on the world wide web. And Google+ is still on it’s way to make a difference.

Check out the video for more details.

[Source: Google+: Communities and photos Google Blog] (All the images, trademarks, logo’s shown on this post are the property of their respective owners)

Is the FBI Laying Traps to Catch BitTorrent Pirates?

Facebook Users Overestimates the Happiness of Their Friends [Video]

The Future of NFC (Near Field Communications)

Watch: The Pirate Bay Documentary “Away From Keyboard”

Find Us On Google+