How Apple is Integrating Technology Into Classrooms

Apple products have long been popular with the consumer public, going back to the original Apple II and Macintosh. The company’s latest keynote address is evident of this fact. Even though there were no real new announcements – most of the products that were announced, like the iPhone 6S Plus, were derivatives of something that the company already sells – the hype leading up to the event was palpable. Even now, a week or two on, people are still talking about it.

In this type of atmosphere, it’s easy to forget that Apple devices are more than simple consumer products. But the fact is that Apple devices are used by professionals on a daily basis in a wide variety of fields, and one field in which their presence is growing is education. From iMacs to iPads, classrooms across the country are becoming dens for Apple products.

The Future of Education is Digital

It goes without saying that computers (and by association, the Internet) are hugely powerful tools which can enable students and teachers alike to learn, produce, explore, and create with greater freedom and efficiency than ever before. Steve Jobs said it best when he likened a computer to being a bicycle for the mind. They enable. So then, it’s well understood that computers can and should have a place in the classroom. Not surprisingly, Apple has long embraced this concept.

One example of this belief in practice is the company’s latest updates to its iTunes U platform. With these updates, Apple is seeking to revolutionize the way that students and teachers engage in and out of the classroom. Among its many features, iTunes U allows for remote homework hand-in and private discussions, and it also includes an integrated grade book and lesson planner. Creating and sharing lessons with students can be accomplished in mere minutes, even if those students aren’t in the classroom. Of course, it also provides access to the many thousands of educational applications which are to be found in Apple’s App Store. For teachers, it’s sort of an all-in-one classroom management application with the familiarity of Apple’s touchscreen iOS interface. Put simply, it is a fully integrated educational tool.

The question isn’t can computers (and tablets) work in the classroom. Their adoption in school districts as far and wide as New York and Los Angeles indicates that they can. The question is how computers work in the classroom. How do you use a computer or tablet to promote learning? How can you use computers, tablets, or a smartphone to improve your processes? How do you use a computer, tablet, or smartphone to do something that would be impossible otherwise? Perhaps most simply, how do you pay for it? There are hardware fees which need to be covered up front, of course, but let’s not forget that many connected devices require a wireless plan as well.

Thankfully, carriers seem aware of this, and some have even taken steps to make their plans and devices more affordable for teachers and students. For example, T-Mobile offers a discount plan for U.S. college students, K-12 staff, and college staff. For those students and faculty that qualify, smartphones and tablets are available for up to $50 off of the resale price – not an insignificant savings. In an ideal world, schools would cover the cost of new equipment, but the reality is that many schools simply don’t have the budget to equip their students and staff with new tablets and smartphones. In such cases, a discount from a wireless carrier is a welcome reprieve.

What Promise Does the Apple Classroom Hold? 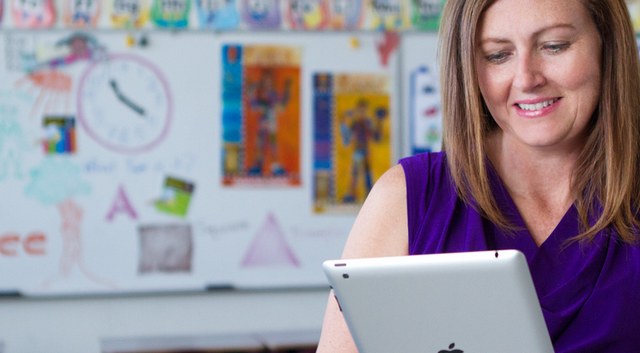 Walk into any modern classroom and you’re likely to see iMacs and iPads. Their presence is so ubiquitous across the nation that it is no longer a surprise (or perhaps even a novelty) to see them in use in classroom settings. But is an “Apple” classroom inherently better than a traditional classroom that doesn’t make use of technology? Ultimately, success can only be judged on how the environment impacts the students, but in our increasingly digital world, exposing children to computers and tablets as early as possible can only aid them in their long-term success. Based on Apple’s commitment to education, it would seem that they agree.

Jennifer Thayer is a technology writer who enjoys writing about gadgets, apps and the latest tech news.