In the 21st century, revolvers are still considered as a potent and a highly effective protection tool. With a history that dates as far back as 16th century Germany and first made famous by Samuel Colt in the first half of the 19th century, the reputation and the need for the powerful revolver never seem to get old.  Their simplicity, ease of use, and especially, ease of training makes revolvers a good weapon of choice, especially for new shooters. But also used by government agencies as well.

Korth is well known as the manufacture of the world’s best revolvers of the highest quality. Their creations often comes in expensive price tags as well, the company’s deluxe revolvers cost up to $10.000. The company introduced the Sky Marshal in January 2015, supposedly under a government contract to arm agents in airplanes with a compact weapon that fires the NATO standard 9x19para type cartridge. It’s a snub-nose of course, utilizing a 2” barrel built in to the aluminum frame and it weighs around 560 grams (1,23lbs). 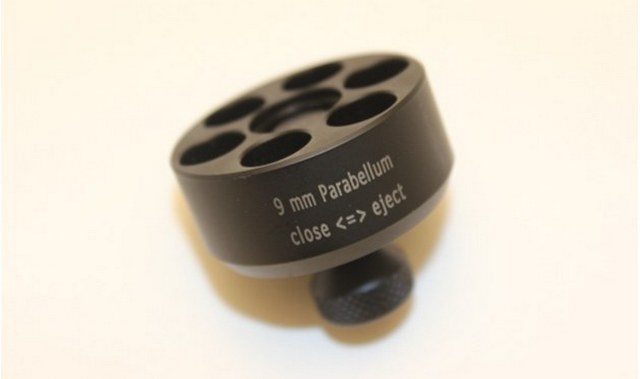 The weapon also features an overall length of only 5,12” and comes packed with excellent sights, usually not found on most revolvers out of the box. The grip of Sky Marshal is standard size, like standard any other sized revolvers, thus this snubbie is as accurate and comfortable as it`s big brethren.

Chambered for the 9×19, the cylinder is also very short as well. Historically pistol cartridges always had a problem in revolvers as they needed moon clips to function. As you might expect from German engineering, the Sky Marshal doesn`t need them and can use speed loaders instead, just like a typical revolver. On the left side of the weapon, you can see a picatinny accessory mounting rail, which is a very unusual for and interesting feature to see in a revolver.

Although, why a revolver for a modern police agency? More importantly, why one as a standard issue sidearm? That takes us back the airplane, where it’s most effective. When agents travel in an airplane, handling and firing an ordinary weapon can be difficult in the confined space. But, thanks to its short but rigid 2” barrel and it`s large comfortable grip, the Sky Marshal is  it`s very point able even where movement is limited and can also serve as nice pair of brass knuckle in hand to hand combat situations, having that rigid barrel mounting spot. Also, its 9mm round is offered in special airplane loads that permit the neutralization of any threat, but is safe to use inside the airplane at the same time because they do not penetrate the walls of the aircraft.

All in all this new snub-nose seems to be adapted perfectly for its intended role. German Air Marshals will certainly make the most use of the all new Korth Sky Marshal revolver.

The Most Powerful Fictional Weapons of All Time – Infographic