Spreading Information About Popcorn Time Could Get You in Jail, Apparently

As it turns out, you don’t have to illegally download or stream a movie to get arrested, even spreading information about such software through a simple blog post is enough to land you in jail. Two guys have been arrested in Denmark for doing just the same thing, and are now facing a maximum 6 years in prison, each.

Popcorn Time is a software that allows you to stream movies and TV shows without having to download them through torrents, illegally of course. The developers of the software faced several Hollywood threats since its release but somehow still managed to survive. 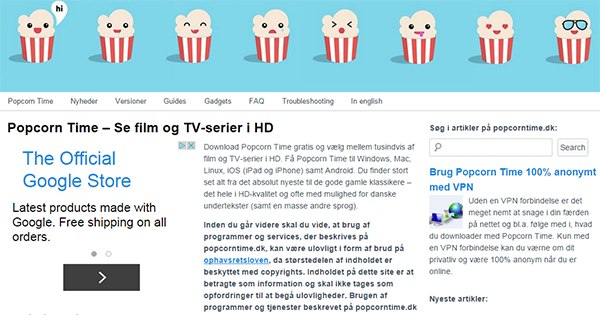 The sad news about these two dudes in Denmark comes as a result of Hollywood being too desperate to take down Popcorn Time. These dudes did nothing wrong, except for writing a few guides about Popcorn Time and linking to the website. As you may know, Netflix is not accessible to all countries around the globe. So, Popcorn Time allowed folks to experience similar movie streaming capabilities through the software.

Hollywood is already working on spreading the fear of using Popcorn Time in the US as well. According to a report by TorrentFreak, a movie studio in the US (creators of the horrible Adam Sandler movie “The Cobbler” ) has filed a lawsuit against 11 users who’s used Popcorn Time to illegally stream the movie.

Obviously, it’s a desperate time for the Hollywood people. I wonder if I’d get arrested for writing this post as well?

[ Source: TorrentFreak (1), (2) ] (All images, trademarks shown on this post are the property of their respective owners)

Zeblaze Crystal Smartwatch Works with Both Android and iOS, Costs Only $65