Japan recently reached a new level of weirdness by hosting the world’s first robot wedding. I’m not even sure how these robots feel about love or if they were forced into this marriage by humans, but I guess with all these marriage equality laws getting accepted, robots should be allowed to get married too. 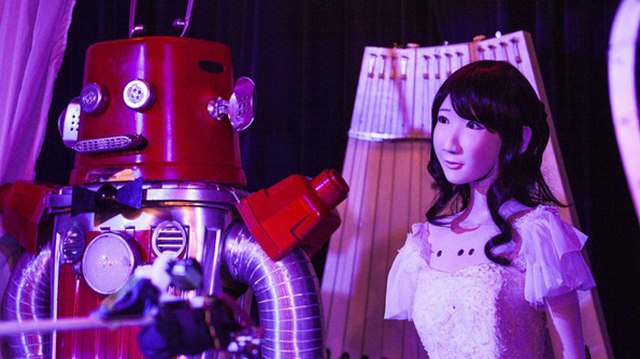 A humanoid robot named Pepper officiated the two robots Yukirin and Frois as a married couple. The ceremony took place in Tokyo, Japan. Several other robots and plenty of humans were there to witness the freaky wedding. apparently they had to pay $81 to see attend the event.

There was cake and a robot band too. The robot kiss was probably the weirdest thing at the occasion. Although, I wonder what they did in the honeymoon.

[ Via: Incredible Things / RT ] (All images, trademarks shown on this post are the property of their respective owners)